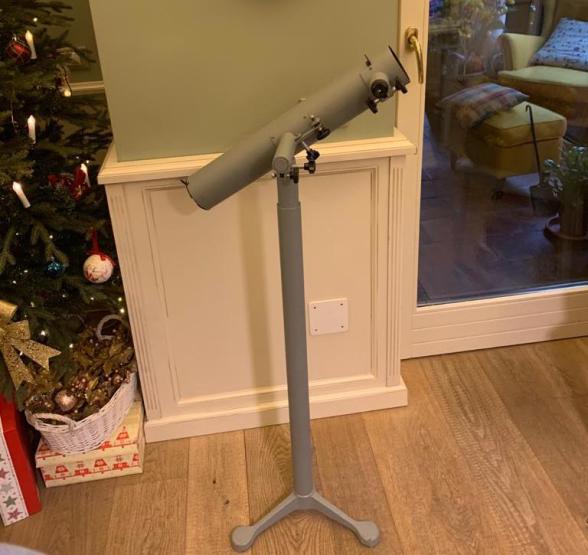 The history of telescoping at the Novosibirsk Instrument-Making Plant

The history of telescoping at the Novosibirsk Instrument-Making Plant dates back to 1973, when a popular amateur astronomy popularizer and filmmaker LL Sikoruk suggested organizing the production of telescopes at the plant.

At the plant, this proposal was met with little enthusiasm, as earlier attempts to organize the production of telescopes at the enterprises of the optical industry were of little success. School telescopes of the TMSh system of the Soviet optician DD Maksutov (1896-1964) were produced in the post-war years in Leningrad and Novosibirsk at the refinery! The author of this article personally held such a telescope in which the logo of the refinery (prism) was present and stood in 1946. School refractors БШР and МШР with diameters of lenses of 80 and 60 mm accordingly produced in 70th years Zagorsky optical factory in the Moscow area.

Engineers of the instrument factory knew that to obtain acceptable image quality, it was necessary to achieve high quality processing of optical components, glass from which the lenses and mirrors were made, should have a minimum of defects - bubbles and felts, the mechanic must also comply with this. All this requires a serious technological preparation of production. There were big doubts as to whether such a cheap consumer goods would be bought. While the discussions were in progress, the decision of the Central Committee of the CPSU on the production of consumer goods arrived, and the director of the plant, B. S. Galushchak (1934-1999), decided to take the matter seriously.

The path to the serial production of the first elementary mirror telescope of the Newton system was long, as long as six years. Developers had to overcome not only technical problems, but also the skepticism of factory workers who did not believe in the idea of a telescope at the plant. The first sketches were developed by LL Sikoruk, the drawings were issued by the employees of the department of consumer goods.

Only in 1979 the refinery produced the first batch of "Alcor" telescopes with a diameter of the main mirror of 65 mm. Telescopes were quickly sold out, despite the great price for those times - 135 rubles (the average monthly salary of an engineer). This model was produced by the plant for 25 years, and in the modernized version of 2004 under the TAL-65 brand, it is manufactured to this day.

All these three models of Newton's telescopes were produced at the refinery for more than 30 years and became a national legend. A whole generation of Soviet amateur astronomers grew up on them, and in the difficult 90s this production helped the plant "survive" in the most difficult economic situation, as telescopes were mass-exported to Great Britain, USA, Canada, Hungary, Iran and other countries.

A telescope of TAL-M with a diameter of the main mirror of 80 mm was added to the ruler of Newton's mirror telescopes in 1991, which had an original design - it had a combined eyepiece for the tube and the finder. In 1999, the high-speed telescope TAL-150P appeared. Unlike TAL-2, this telescope had a parabolic mirror with a shorter focus, and hence a wider field of view. For the first time, a 2-inch focuser appeared on the telescopes of the refinery, and the pipe was even shorter than that of the TAL-1. All this made it possible to effectively use the TAL-150P in astrophotography.

Let us mention here a small souvenir telescope TAL-35. It was a copy of a historical telescope manufactured in 1668 by Sir Isaac Newton. From this small mirror telescope, the entire class of telescopes of the Newton system takes place. The souvenir was manufactured and put into serial production in 2005, to the 100th anniversary of the plant. It was not just a souvenir, but a working copy, it was possible to conduct observations with its help, it gave a 30-fold increase. It's a pity that now this elegant souvenir has become a rarity.

It must be said that foreign buyers were valued not only by telescopes themselves. The cases in which the telescopes were packed were made of lacquered multilayer plywood, all the nodes are securely fixed in their places. This was in stark contrast to the usual Western packaging and, therefore, was forced to respect, despite the heavy weight of the boxes.

The company from the UK Optical Vision Ltd. achieved exclusive rights from the plant and reshipped TAL telescopes around the world, including the United States, long before the hegemony of Chinese goods. Advertising telescopes TAL was constantly present in leading Western magazines for lovers of astronomy, including the legendary American magazine Sky & Telescope. For several years, since 1994, a container with telescopes left every month in England, from 167 (20-foot container) to 334 (40-foot) telescopes of different brands. In the 90s, more than 100 containers were sent for export. In those days legendary for the plant, one of the TAL-2 telescopes was on display at the famous scientific museum, the German Museum in Munich, where it is still located.

Since the mid-1990s, according to the numerous requests of amateur astronomers, both Russian and foreign, and with the aim of expanding the line of telescopes, the refinery began developing refractors. In 1998, the first lens telescope, the achromat refractor TAL-100R, was launched. Its optics was developed on the basis of the industrial collimator OSK-3, the telescope had a lens diameter of 100 mm and high image quality.The beginning of the production of lens telescopes at the refinery was in line with the worldwide trend: refractors around the world are the most mass-produced group of telescopes for astronomers.

The expansion of the line of refractor-achromates was decided to lead both to a larger and to a lesser extent. In 2004, the telescope TAL-125R with a lens diameter of 125 mm was launched, and in 2005 - the TAL-75R, a small-sized, gift telescope that was very popular with the mass consumer. For the first time, the refinery telescope was packed in colorful cardboard packaging, attracting the attention of potential buyers. The same beautiful packaging was received by another mass telescope - TAL-65. Optical schemes of telescopes-refractors were developed by the experienced optometrist-calculator AS Ageev. The developer of the design was the author of this article.

At this time, the plant, in addition to the telescopes itself, produces many different accessories to them. This is also the eyepieces of three rulers (symmetrical, wide-angle and ultra-wide-angle), Barlow lenses, eyepiece-guide, planetary eyepiece, 2-inch diagonal mirror, light filters and others.

This development required a further increase in the diameter of the lens in new models, which in turn predetermined the transition from mirror and lens telescopes to mirror-lens, as the most compact and light, which is the determining factor for amateur astronomers.

The first experience of developing and manufacturing a TAL-3 telescope with a mirror diameter of 200 mm and a spherical meniscus, despite the high quality of the image, was recognized as unsuccessful, since it was very difficult to produce such a telescope serially. The Maksutov system includes two full-aperture elements - the main mirror, which has one surface to be treated and a spherical meniscus with two surfaces, which almost three times increases the laboriousness of the product. In addition, the telescope required a complete re-equipment of the control and adjustment equipment. In 1992-93, three prototype TAL-3 prototypes were manufactured, this stopped the case.

In 1998 the Novosibirsk optician-calculator Yu. A. Klevtsov turned to the plant again with his mirror-lens telescope circuit with a 200 mm main mirror dimmer. The management decided to develop this telescope, and in 2000 the plant began to produce the telescope TAL-200K, the scheme of which was patented by the author. In contrast to the Maksutov scheme, the corrective optical elements here were smaller, they were easier to fabricate.

By this time, for assembly, alignment and quality control of telescope images, the assembly shop is equipped with a 3-meter collimator with a lens diameter of 300 mm, later an autocollimation plant with a flat mirror of 300 mm developed and manufactured at the plant also appears, all complex optical components undergo interference control.

In 2001, the telescope TAL-150K with the diameter of the main mirror 150 mm was also launched, it was limited in demand, since the cost of this telescope was higher than that of the TAL-2 and TAL-150P, and the image quality is worse due to large secondary.

In 2005, the refinery produces the largest telescope, TAL-250K, with the largest diameter. Here the advantages of the Klevtsov scheme are fully revealed. Because of the novelty of the scheme and the high price, at first, amateur astronomers reacted to the telescopes of the Klevtsov system with caution, but subsequently, due to their small size and weight, these models and mainly the TAL-250K are in demand among advanced amateur astronomers. Leading Russian and Ukrainian astrophotographers, engaged in surveying the objects of the solar system and deep space, appreciated these instruments. From the middle of the zero years in connection with the rapid development of amateur astronomy,the introduction of digital technologies and the increase in the material level of consumers in the most popular segment of amateur telescopes in the world, there has been a consistent tendency to displace lens refractor-achromat telescopes with more expensive but more sophisticated image refractors-apochromates and especially ED-apochromates (semi-aphromata).

In 2007, the factory optician A. S. Ageyev developed and patented a scheme of the refractor-apochromate on simple glasses, which was twice cheaper than the ED-apochromates produced by the PRC. In the same year 2007, a prototype TAL-125ARO was manufactured, which had a stunning success at the Moscow and Kharkov Astrophasts, at the Sibastro forum, and in 2008, the serial production of these telescopes was started.

In 2010, the new telescope TAL-150ARO refractor-apochromat was developed and launched in the series, positioned as an astrograph telescope, but with good characteristics and as a visual tool. This is the best in quality image telescope refinery. Unfortunately, the telescope was not produced in large series, as it was relatively expensive, although cheaper than foreign analogues. The reason was that the plant at that stage had to use simple glass not from our Lytkarin plant, but from the glass of the German company Schott, because they were more qualitative.

In 2011, the Novosibirsk Instrument-Making Plant developed, manufactured and presented the newly discovered planetarium in Novosibirsk with the telescope refractor-apochromat TAL-200A. The main problem in its production was the supply of OK-4 glass with a special dispersion course to the LZOS refinery. In addition, the flint lens was foreign. It was supplied by the Izyumsky plant of optical glass (Ukraine). The telescope had an ED-apochromat scheme, two revolvers with eyepieces and a 3-inch focusing device with an electric drive and a control panel.

In 2012, the largest telescope telescope, TAL-350K, was developed at the plant. In its development, many wishes of amateur astronomers were taken into account, namely: accelerated thermostabilization of the main mirror, the dew-prevention system at the corrector, a 3-inch focuser with a drive and a remote control. However, the plant did not begin to manufacture prototypes, explaining this decision mainly to the high cost of optical blanks, the lack of control and adjustment equipment and, as it seemed to factory marketers, a small number of future consumers.

Now other times have come, the plant moved mainly to the implementation of the state defense order and has no opportunity to pay sufficient attention to the development of new telescope models. However, telescopes continue to serve to strengthen the image of the enterprise, performing an important social mission. The plant is often a partner of various astronomical events held by the Great Novosibirsk Planetarium, among which are the All-Russian and International Olympiads in astronomy. Winners of such events deservedly receive awards and prizes - telescopes from the refinery." 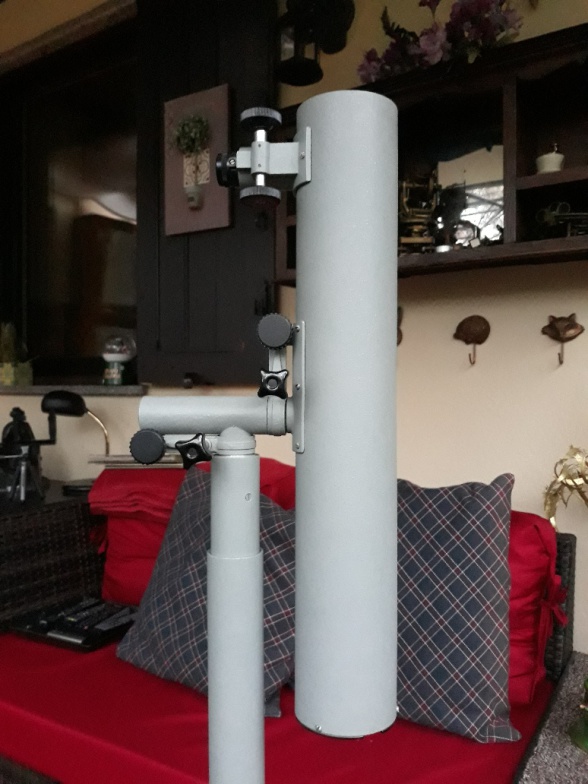 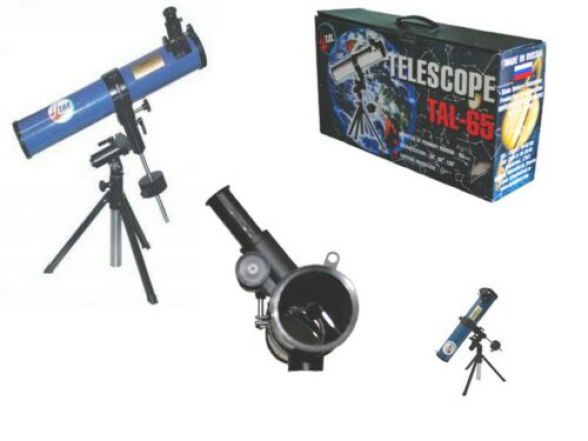 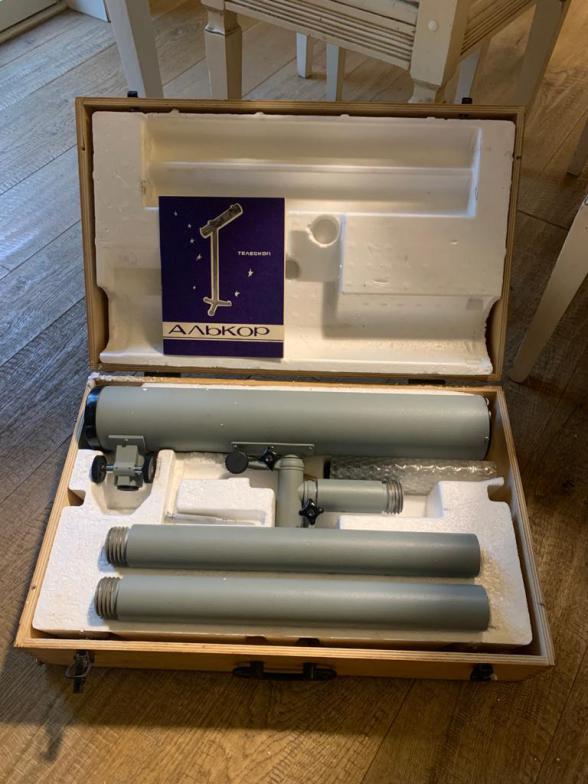 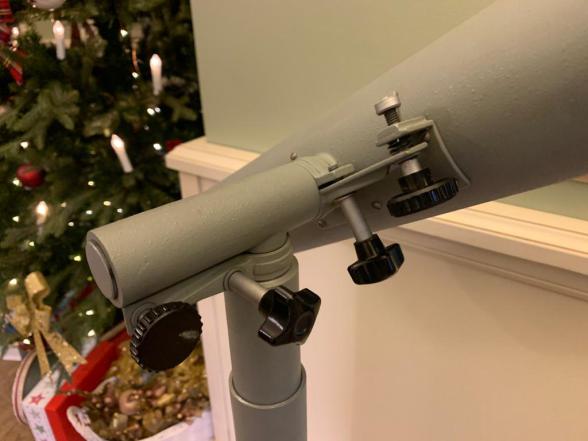 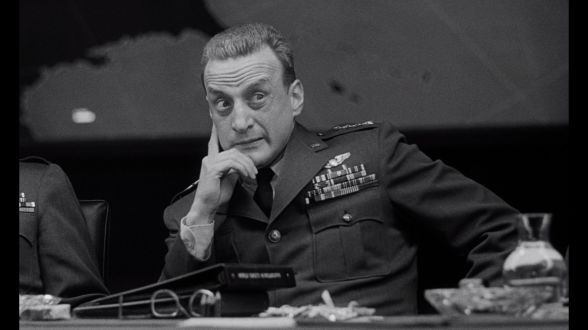 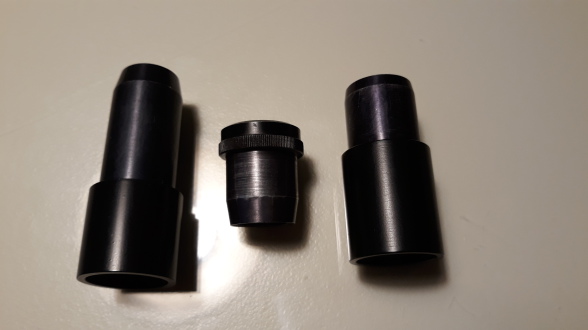 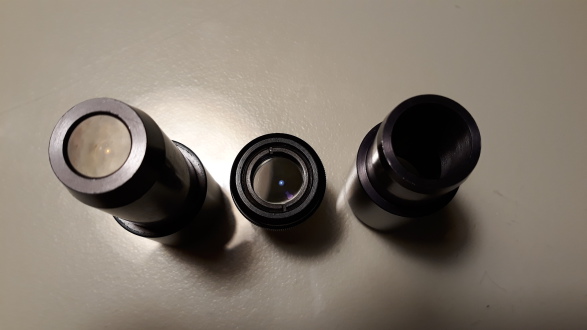 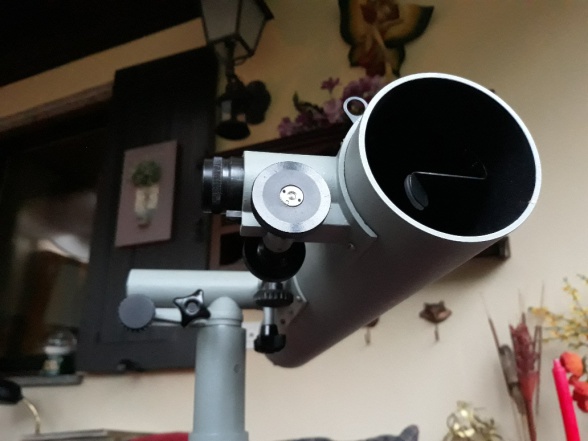 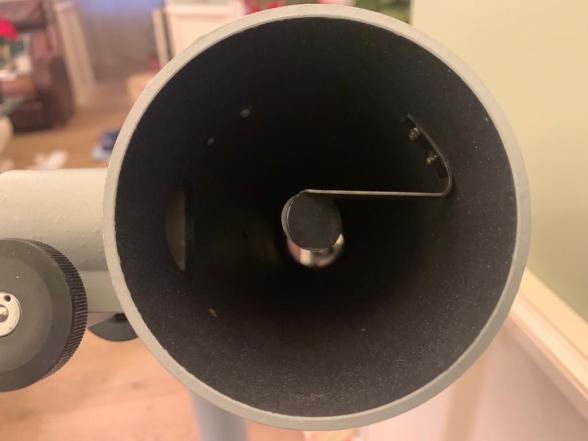 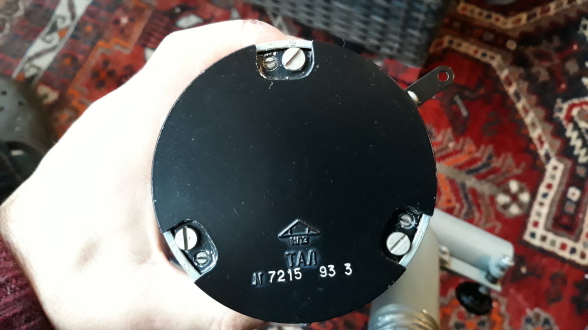 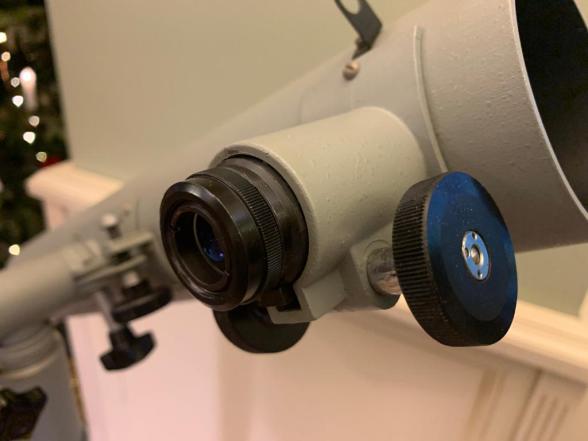 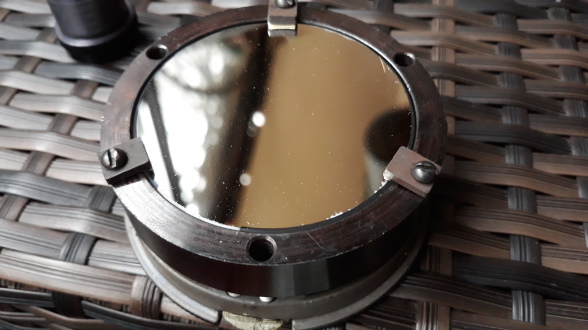 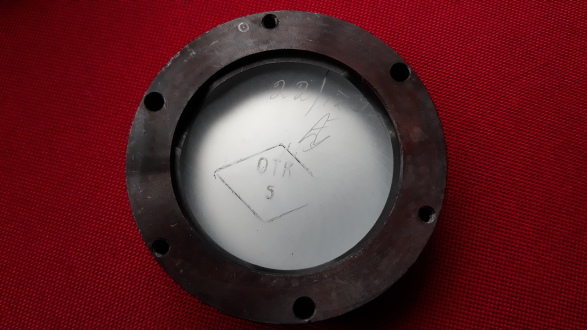 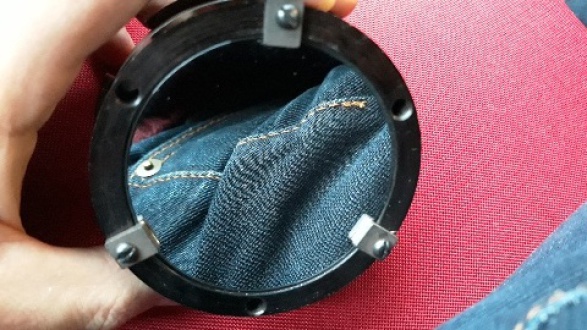 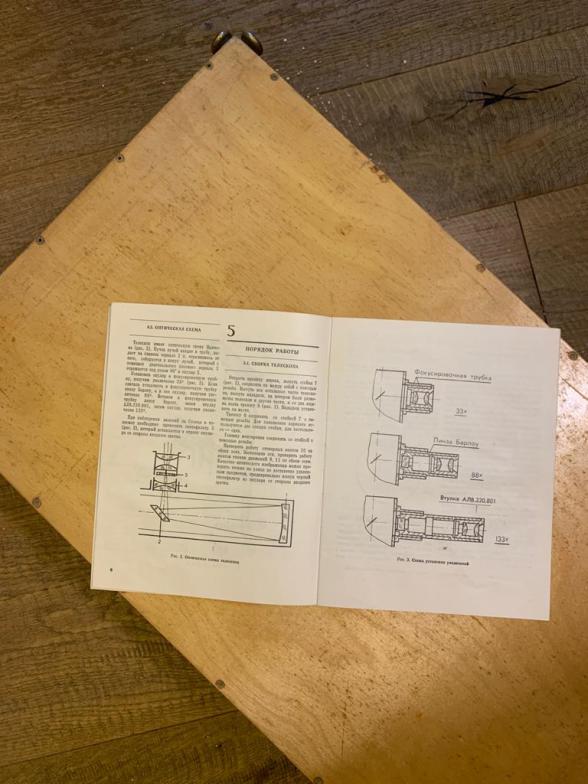 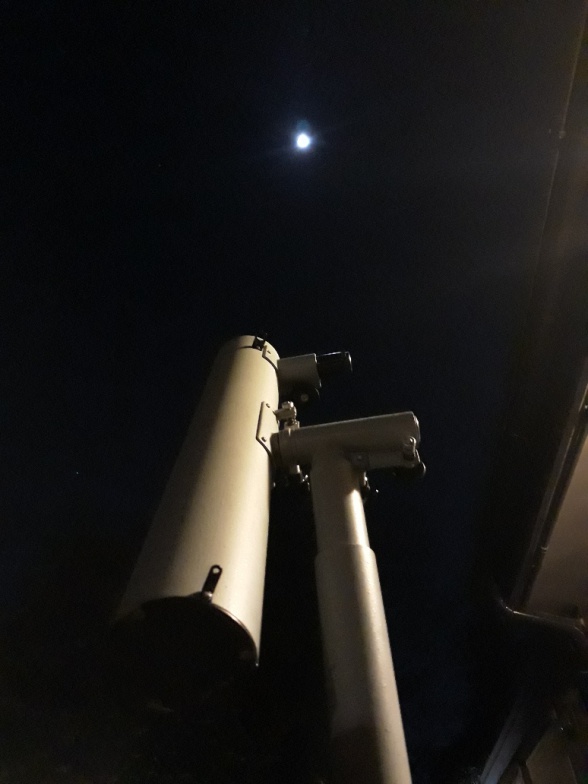 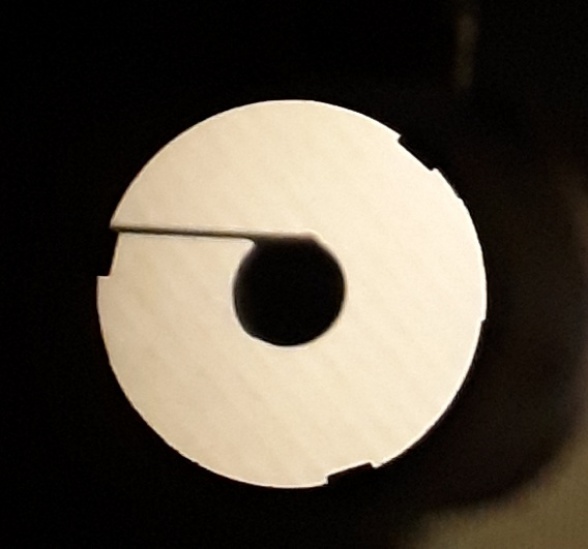 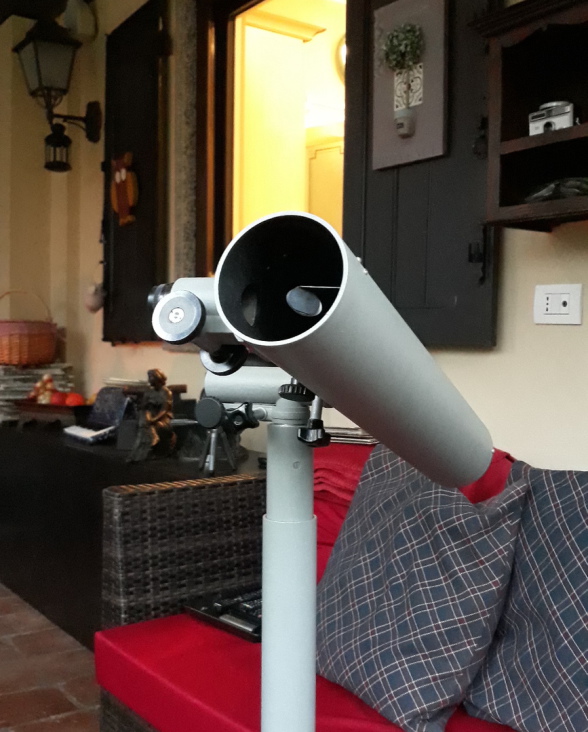