Dear Colleagues, I bring to your attention a small report on the results of observations with the new apochromatic refractor Apolar-125 (A-125) manufactured by Novosibirsk Instrument Making Plant (OPP). From our Forum, it was quite a lot of different kinds of opinions, projections and conclusions on this device, unfortunately, not always accompanied by specific observations. In this report, you will present the results of visual and, increasingly, of photographic observations received during the period from March to September this year, on the balcony astroploschadke pyatitietazhki, located on the south-east of Moscow. disclose in advance "lovers of detective stories," that said telescope is a copy of the serial number 352 and all the following pictures were obtained from their original alignment.

Externally, the telescope tube A-125 is very similar to the well-known to many fans Achromat Refractor Tal-125R (see photo 1a). The pipe comes in a solid plywood box and comes with only a ring-straps with a comfortable handle and a seeker of 6h30. The telescope is equipped with a metal hood with the annular groove on the inner diameter (photo1, r). Hood is fixed on the lens barrel with two screws (1). Blackening pipe and hood very good make - black with a grayish tinge (Photo 1c, d). searcher unit is equipped with an eyepiece with a very thin, comfortable cross hairs with the possibility of illumination. LED lights sold separately or, for owners montirovok MT-3C, can be used on light poles seeker. Attention is drawn to an interesting technical performance counters finder (photo 1b). As the alignment site was used by developers ball joint, located in the housing 1 also has a reticule on the rack hole (2). Focuser Crayford two-inch telescope with an adapter for 1.25 inch eyepieces included.

Diffraction pattern on the star Castor (a Gemini, BV 0,03) showed a good alignment of the device without significant astigmatism and spherical aberration (photo 2 a), at the same time at magnifications over 2D, there are traces of a small misalignment coma, which is expressed in the darkening ( without breaking) of the first difrakfionnogo ring on one side of the circle and the appearance of a barely visible segments of two or three rings on the other side. It is possible that this phenomenon is associated with a small displacement of one of the components of the system that recorded patterns obtained with the help of GMK-collimator. 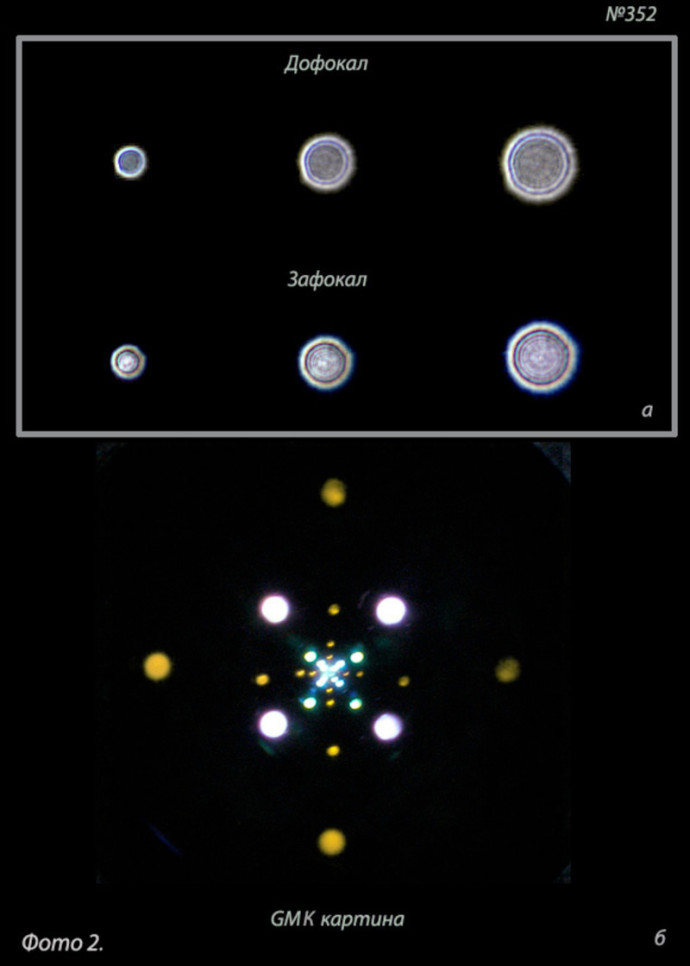 Nevertheless, as shown by follow-up observations, it had no impact on image quality, which remained clear and contrasting.

The first glance through a telescope A-125 does not leave indifferent form star clusters M44 and M45 in the constellation Cancer and Taurus are very beautiful. Stars, using the popular expression, looks as if pinned with a fine needle, and that certainly is a big plus device, without some may be allusions to chromatism. Of particular interest to evaluate the resolution of the A-125, are observations of binary stars. Below is a small list of test double Numbering directory SAO.

Information taken from the catalog of Paul Couteau.

Note. Couples at No. 2,3 and 5 are separated by a confident air about 6 points on a scale Pickering and increased 250x, but the others are closer pair at this same magnification show their ambivalence in a more relaxed atmosphere.

Observation of the Solar System.

Moon. The observations were made at the average state of the atmosphere on a scale of 5-7 points Pickering at magnifications 94-376 ×, using a series of eyepieces OK F-7, 5 and 10 mm, as well as Barlow lenses PAG 3 (all production of oil refineries). Increase 94h require the installation of "lunar filter." bright contrast image is stored in the entire zoom range, very small parts are viewed in bright areas of the limb, especially in areas close to the terminator. The phases around 0.8 and is closer to 0.5 are viewed on up to five kraterochkov " Mirror of the crater Plato. The sizes of these "kids" of 3 miles or less, while a relaxed atmosphere and certain lighting conditions, such as "minor" Education can be seen in the crater Archimedes (see photo 3). No trace of chromatic aberration on the details of the lunar surface was noted. 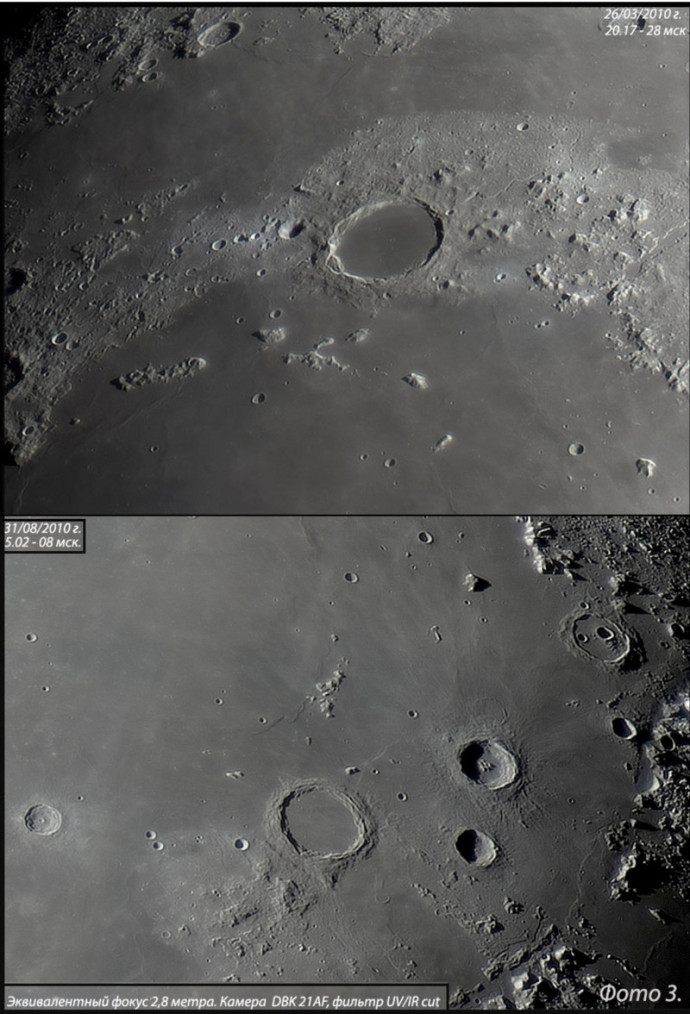 Sun. Achromatic refractors, even with established MV-filters can not convey the structure of sunspots without chroma colorization shadow and penumbra. Apolar same contrast, shows virtually monochrome painting with no whatsoever halos (compare the photo and photo 4a 4d), a clear and contrasting with a slight bluish tint characteristic of the aperture of the filter from the film AstroSolar, without a doubt, the photosphere of our light favorable object for observations with the A-125.

Note. Photos in the installation of 3 and 4 are presented in otkroplennyh originals without the use of color correction. Filming was carried out on a color camera DBK 21AF firm «ImagingSource» with a filter UV / IR cut. An exception is the picture 4b provided in black and white and receiving apparatus Canon 1000D c green filter.

Mars. The diameter of Mars in late March of this year was slightly less than 10 arc seconds, and the five inch aperture, the planet is a rather complicated object in the visual observations. Nevertheless, large formations on the planet thanks to a good contrast could be seen quite clearly. In the north - the polar cap and the Great Northern Plain in the south - the land of Prometheus and Kimmerian land. Photo of Mars in the same position of the planet (see photo 5 a) demonstrates the presence of finer details in the center of much Elysium plateau and right next to the brim, the area of Mount Olympus.

Saturn. Observations of Saturn and its family of A-125 despite the small rotation angle of the rings is of particular interest primarily determine the visibility of parts of rings and satellites of the planet. If the average of the statistical unit of the Moscow atmosphere confidently showed North and South equatorial zone and the darkening of the North and South Polar regions toward the poles. Kind of penciled "lenticels" rings was quite remarkable. Cassini gap, surely different in March in the form of his short lines in the tips of the Rings, to the end of April, visually determined, but the photograph of the planet from 29.04 quite clearly visible (see photo 5 a), as well as the equatorial belt, which is visible in the photograph as a thin striped, located over the planet. As for Saturn's moons, in addition to well visible Titan, Rhea, Tethys and Dione, edinozhny April 12 found Iapetus and, it seemed, Enceladus, though full confidence in the detection of the latter do not.

Jupiter. Very good and interesting objects to observe in the A-125. The disk of the planet is clearly visible in North and South tropical zone. North and South sub-tropical zone. Festoons noticeable in the equatorial zone, the various "irregularities" in the zone - the teeth, bridges, columns and rifts. Very impressive looking dark thickening, bars and nodules. And of course the famous Great Red Spot and his "young companion" - small red spots. With a little turbulence can be seen and the heterogeneity of the Red Spot and the large windows in the south temperate zone. (See Picture 5b) Confidently different disk of Jupiter - Ganymede, and, at the limit of the disc of Io.

Uranium. Observation of Uranus in 5-inch telescope, of course, will not give the possibility to see the lover of any kind was more on the planetary disk, but the sight of a turquoise-greenish "pearls" on a velvet sky background is definitely not leave him indifferent.

Note. The observations were made at the average state of the atmosphere 6.8 points on a scale Pickering at magnifications of 188 - 250 x, using a series of eyepieces OK F-7, 5 and 10 mm, as well as Barlow lenses PAG 3 (produced by oil refineries). All the pictures of the planets and satellites (photo 5) were obtained using a camera DBK 21AF firm «ImagingSource» with a filter UV / IR cut lens and 5x Barlow.

To determine the quality of the photographic instrument field survey was carried out parts of the Milky Way in the constellation of the Dolphin on a digital mirror device Canon 1000D in the standard version, the matrix size 22.2 x14, 8 mm, the crop factor 1.6, 10 Mps. The telescope was installed on the mount HEQ 5PRO with control EQMod. As a tour guide used the camera lens Jupiter 37A (F = 135 mm) with a camera DSI PRO II (photos 6-1) and the program autoguider PHD Guiding. The exposition in a shooting was 90 seconds.

As seen from the photos (photo 6), the field device rather flat and a small pull of stars observed in most corners of the frame where you can also see the influence of chromaticity increases, which manifests itself in the form of centripetal blue-violet "tails" in white and blue and white stars.

It is interesting to note that applying a filter UHC-S shooting (see photo 7) significantly reduces this effect.

This is very clearly visible on Photo8, which shows the cropped area in the sky near the star Beta Dolphin (Rotanov). As is evident from these paintings traces tagged with "tails" disappear almost completely. This fact should be considered an amateur astrophotographer when shooting in color matrix size of 15x15 mm and larger. It is possible that chromatism increase can also be corrected with the help of MV-filters, but this will require further study.

Notes. Photos 6 and 7 were prepared for publication by Ivan Ionov. Shooting information is shown in the picture.

Based on our observation we can make some conclusions:

1. Apochromatic refractor Apolar-125 production oil refineries is a quality instrument suitable for both visual and for photographic observations of various astronomical objects

2. The device has a good visual resolution (up to 1 arc-second), differs sufficiently high contrast and total lack of chromaticity along the axis.

3. A small misalignment coma, marked the beginning of this report, the observed effect on image quality has not.

Note. Conclusion on item 3 was confirmed by experts MO AGO Sankin Oleg and Vladimir Suvorov at bench research telescope.

Wishes of the manufacturer.

1. Despite the fact that the residual coma almost no effect on image quality, very desirable that the manufacturer of a carefully conducted pre-market control on this parameter.

2. Finder unit is not suitable for observations on the standard columns. It is very desirable to apply the searcher with a 90 degree kink axis.

4. Adjusting screws M3 focuser (see photo 9 a) the bolted and covered with lacquer, if necessary, adjusting the focuser is a danger of disruption of slots, which can lead to a removable hard consequences. Perhaps, more reliable and safer to install the screws with a head for an internal hex wrench.

In conclusion, I wish to thank Ivan Ionov, Igor Chekalin Sankina Oleg and Vladimir Suvorov for his great help in preparing this report and investigation unit. 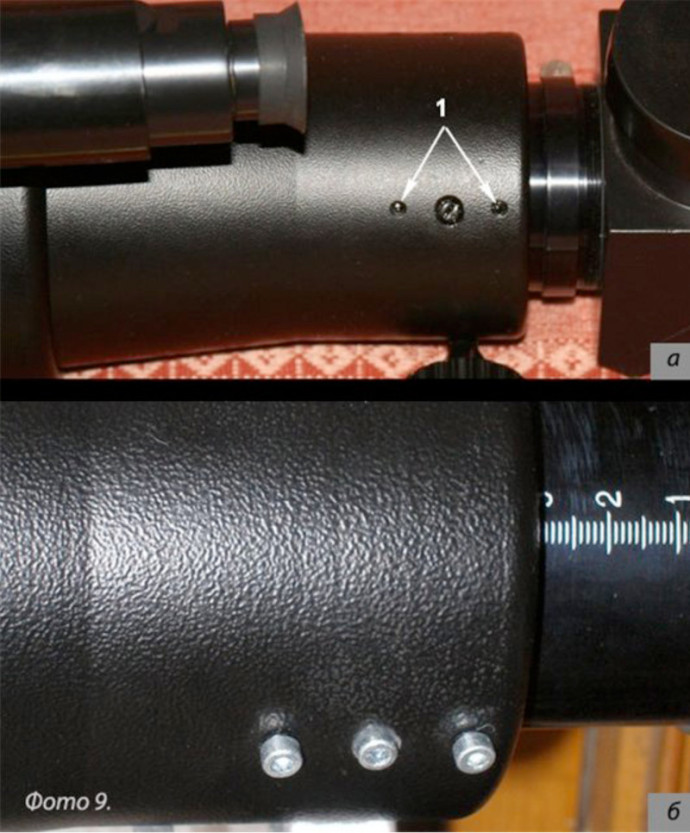 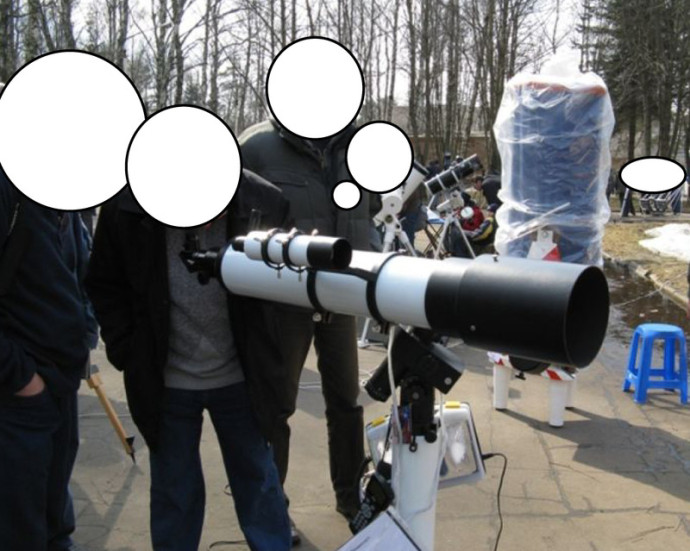 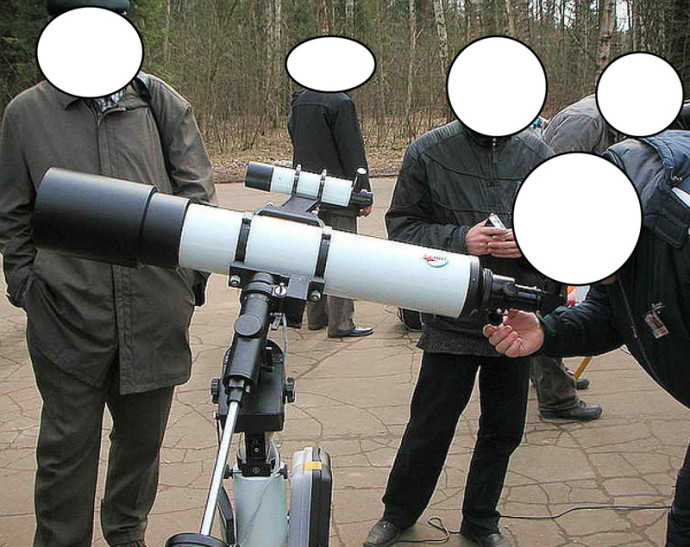 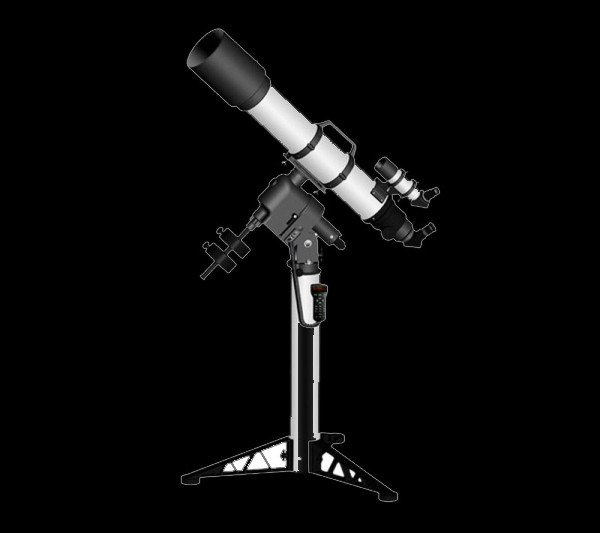 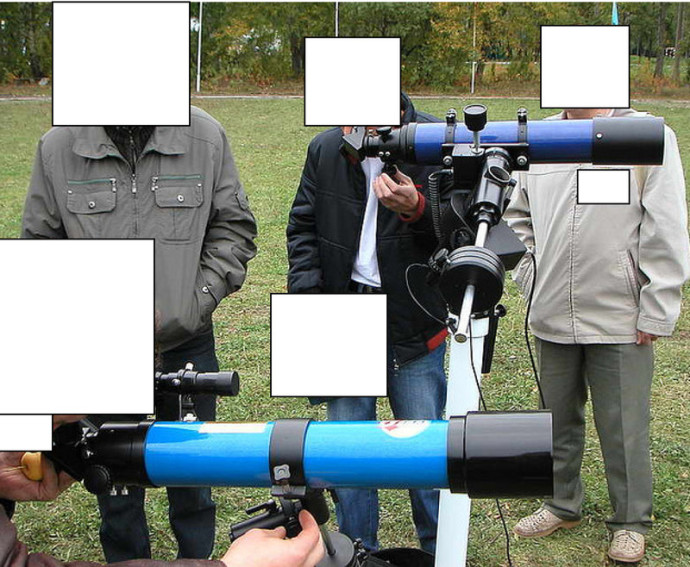